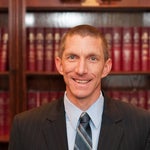 Timothy L. Horn, Partner, has two decades of legal experience in a variety of practice areas.  Timothy L. Horn is a former judicial law clerk to the Honorable Edward J. Turnbach, J.S.C. and completed an externship during law school with the United States Attorney's office in Camden giving him a tremendous background in criminal law. Tim has been a lifetime resident of Ocean County, New Jersey. When not practicing law, Tim Horn can be seen swimming, cycling and running throughout the Jersey Shore area and beyond while training and racing for triathlons.

Ocean County Bar Association Annual 5K Run/Walk – Committee person since inception of event to the present. This is an annual event that benefits a local charity.

Jersey Shore Triathlon Club – I currently serve on the Board of Trustees as a Vice-President for this 500+ member triathlon club.

Sons of the American Legion – Member

Competitive triathlete, duathlete, and runner training and racing throughout the Jersey Shore and beyond.  Member of Team USA as an age group athlete competing in the ITU Duathlon World Championships three times in Calais, France; Weyer, Austria; and Newcastle, Australia.

We offer a Free Consultation.  Please fill out the form below and an attorney will get back to you as soon as possible.

Thank you for contacting us. We will get back to you shortly.

Please complete all required fields below.

Has numerous years of experience handling dog bite and personal injury cases in New Jersey. As a leader in his field, Mr. Villani has taught “Handling The Dog Bite Case In New Jersey” to fellow lawyers and judges at the New Jersey Institute for Continuing Legal Education.